MAKING YOUR VACATION PLANS? Why spend more than you have to? Tom's got you covered. Use his travel tricks with credit cards, rental cars, booking hotels, airfare, and more!

Click here to get that $25 credit Tom told you about when you book your first trip using Booking.com!

Got a money question for a future episode? Click here and send it in right now: tom@blowmeuptom.com.

CHRISTIAN MAJOR LEAGUE BALLPLAYER BOOTS HIS CHRISTIAN POP STAR WIFE ALLEGING "INAPPROPRIATE MARITAL CONDUCT" Chicago Cubs second baseman Ben Zobrist filed for divorce from his Christian pop star wife Julianna Zobrist contending that his wife "has been guilty of inappropriate marital conduct which renders further cohabitation impossible," which, we guess, means that he claims that she's been screwing around while Ben has been out there earning a massive paycheck, telling everyone what great Christians they are, and how you should be one too.  What does this teach us about marriage, "love" and religion? Here, Tom sets everything straight!

In this episode, Tom refers to this article about the Zobrists' pending divorce.

In this piece, Ben Zobrist refers to himself as a "missionary to baseball" before we all found out what was really going on at his house.

Click here to see how you can hire Julianna Zobrist to lecture your group about how "to express the joy and freedom of knowing that Christ gives them the strength to be bold, fearless, and confidently vulnerable knowing that you don’t have to measure up to what others think of you but rather, knowing your true strength can shine because of who you are in Christ." That is, when she isn't busy being accused of "inappropriate marital conduct".

ALL THE REASONS YOU SHOULDN'T "MENTOR" WOMEN AT WORK The people who would hate this episode will never hear it here behind the paywall. But YOU will love it. Facebook's Sheryl Sandberg completely disagrees with Tom!  Here's practical advice women will hate for men trying to navigate the #MeToo era. It's all here!

Here is the main article to which Tom refers in this episode.

Here are the results of a survey Sheryl Sandberg commissioned detailing men's reluctance to meet alone with, mentor, or travel with the women who work with them.

Of course you have opinions about this topic. Let's hear 'em: tom@blowmeuptom.com.

HOW NOT TO BECOME JULIO URIAS Dodgers pitcher Julio Urias was arrested and charged with domestic battery after he allegedly "pushed a female companion to the ground" during an alleged argument in the parking structure at LA's Beverly Center. The woman denied that anything physical happened, but others insisted that the alleged incident had indeed happened and that there was video evidence to prove it.  But isn't this true? If he didn't bring a girlfriend to the mall, he wouldn't have spent the night in jail, right? Hear Tom's response to the Hashtag Lynch Mob that's coming after Your Professor for telling the truth, find out why this could be YOU and how to make sure this never happens to you!

Here's the original story Your Professor saw before posting his tweet. 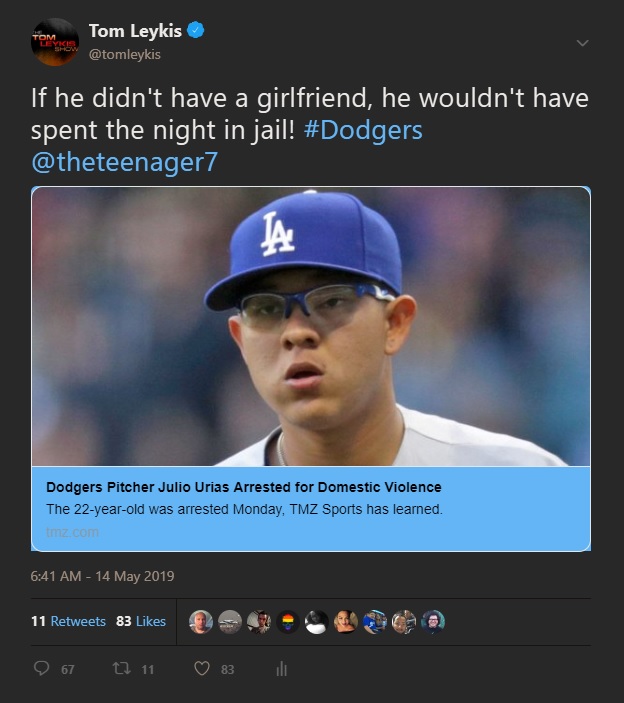 SEX STRIKE? Alyssa Milano has called for women to withhold sex following the passage of Georgia's so-called "heartbeat" bill, further tightening restrictions on abortion which was signed by Governor Brian Kemp on Tuesday, May 7th. The bill is scheduled to come into effect on January 1, 2020. Do you agree with this method of protest? Tom lays out his position.

Here's an article Tom used to prepare for this episode. 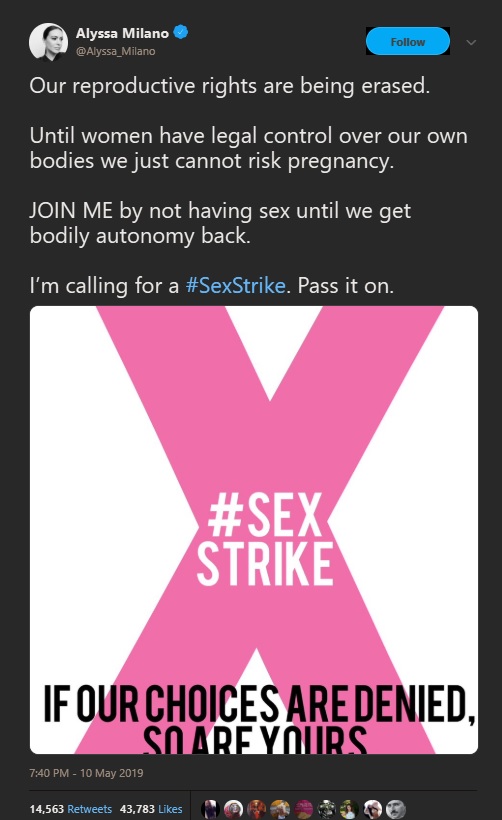 UBER AND LYFT DRIVERS WENT OUT ON STRIKE: DO YOU CARE? They want higher wages and benefits. They're complaining about the costs of insurance and gas and vehicle maintenance. So some of them refused to come to work. Did it make any difference? Or do we just love cheap rides at any cost? Tom's dad was a union guy. His reaction may surprise you!

What do you think? Write Tom directly: tom@blowmeuptom.com.

HOW BADLY DO YOU WANT TO BE IN LOVE? The chick in this story really, really wanted to be in love! She found a man who pampered her, flew her around the world on private jets, claimed to be in the diamond business. And then, she had the surprise of her life.

Click here to see the video of the woman in the story and decide for yourself if she's a complete sucker.

Got a Leykis 101 question for Your Professor to be used in an upcoming episode? Write Tom directly: tom@blowmeuptom.com.

TRAVEL DAY Tom wraps up his trip to New York City with a brief review. How did it go? Now, back to LA!

FARRAKHAN, JONES, AND YIANNOPOULOS BANNED A number of people defined by Facebook and Instagram as "hate groups" have had their social media accounts closed. Has people's free speech been taken away? Tom's answer might surprise you!

Click here for the article Tom references in this episode.

What do you think? Write Tom and tell him: tom@blowmeuptom.com.

POOR SHAMING: WHAT IS IT AND IS IT WRONG? Chase Bank got a ton of blowback for a tweet in which they offered advice to people with "low bank balances" on how to save more money. So they apologized. But wait: is that really wrong? Is shaming the poor wrong?

Here is the article that Tom refers to in this episode.

Got a money question or your own take on this topic? Write Tom directly: tom@blowmeuptom.com.